•By Friends, To Mark His 61st Birthday

Senator Mohammed Rabin Kwankwaso is a big name in Nigerian politics. Although he is from the North, he has a lot of friends across Nigeria. He is detrabilised. The big news is that this Kano Senator stormed Lagos two weekends back for the celebration of his 61st birthday hosted by his friends on Saturday October 21st, 2017, Kwankwaso’s friends hosted a cocktail evening party at the prestigious Oriental Hotel, Lekki, in Lagos
. 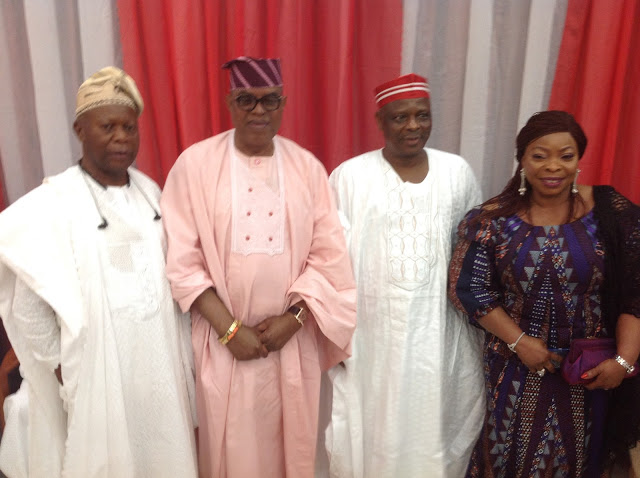 The team of friends tagged RMK 61 invited some of his other friends from the political sector to come celebrate this accomplished politician who has been a Governor, a Minister and a Senator. 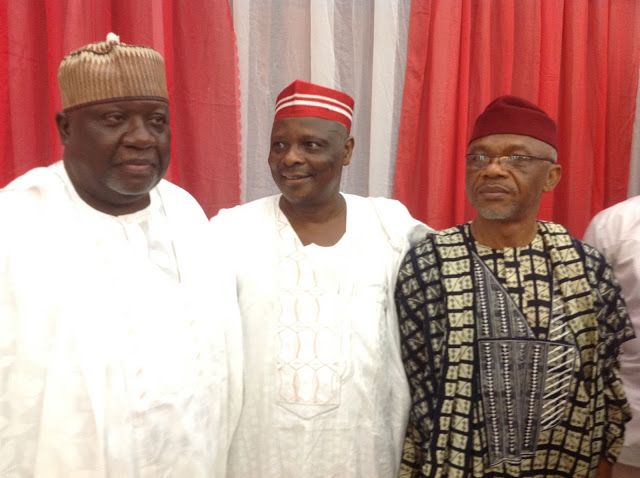 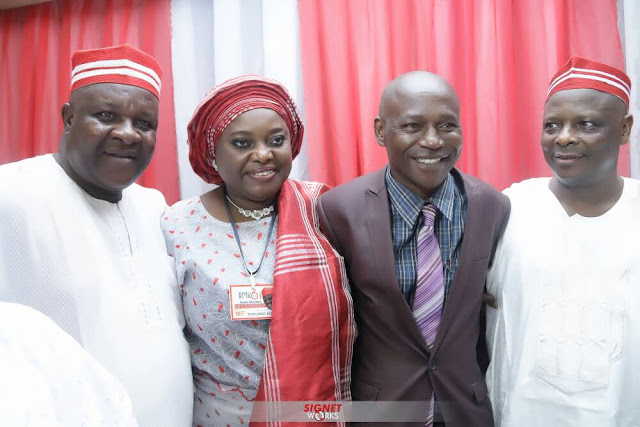 You will be surprised that Kwankwaso, who came second during the Presidential primaries of the All Progressive Congress, APC (a primary election that ushered President Buhari’s candidature in 2015) and who single-handedly delivered over a million votes from his state, as a serving Governor, to seal Buhari’s victory even before INEC’s conclusion of counting exercise, had only one security detail; a policeman.

Hardly would any politician in Nigeria and other post-colonial Africa walk without almost an army of security men numbering no fewer than 15 to 20 armed men, making it almost impossible for anyone to have a close encounter with them.

This is not the case with Senator Kwankwaso. He beat the imagination of everyone at the event as he walked in with just one Policeman and ensured that he shook the hands of all that were present. 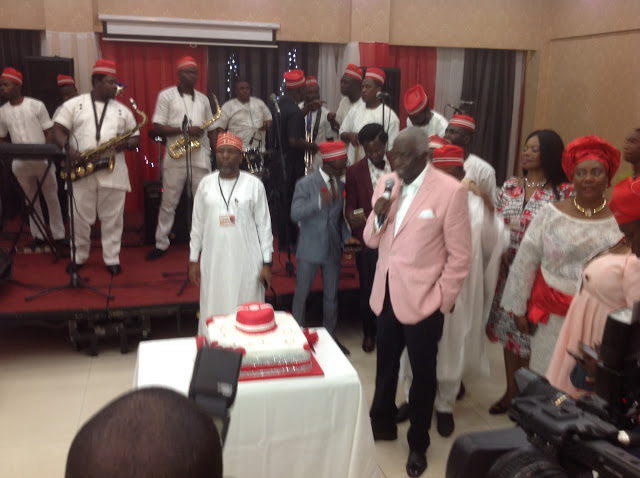 This extremely humble gesture incited City People to inquire from some of the organisers and friends, who really is Rabiu Kwankwaso.

For the purpose of those who haven’t “Googled” him. We want to briefly fill you in on his background and how he rose to the rank to become one of the carriers of development ideals in Nigeria. 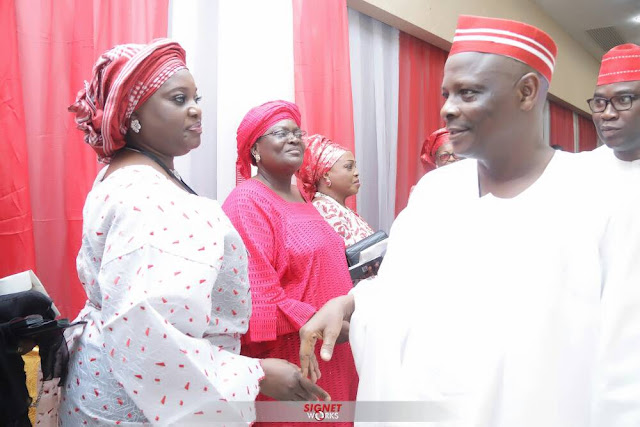 He did postgraduate studies in the United Kingdom a Middlesex Polytechnic (1982-1983) and Loughborough University of Technology (1983 -1985) where he got his master’s degree in Water Engineering. 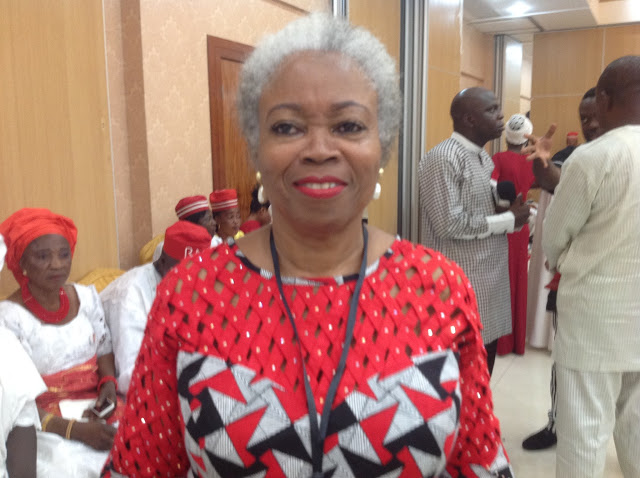 Kwankwaso was an active student leader during his school days and was an elected official of the Kano State Students Association.

Kwankwaso started work in 1975 at the Kano State Water Resources and Engineering Construction Agency (WRECA), serving as a civil servant for 17 years in various capacities and rising through the ranks as the Principal Engineer.

Kwankwaso was elected as a member of House of Representatives representing Madobi Federal Constituency in 1992. His subsequent election as Deputy Speaker of the House shot into the political space. This was under Peoples Front faction of the SDP led by General Shehu Yar’adua.

During the 1995 Constitutional Conference, Kwankwaso was elected as one of the delegates from Kano, as a member of the People’s Democratic Movement led by Yar’Adua.

He joined the PDP in 1998 under the platform of Peoples Democratic Movement in Kano led by Mallam Musa Gwadabe, Senator Hamisu Musa, and Alhaji Abdullahi Aliyu Sumaila. He is one of the great minds and get-it-done leaders that PDP lost to the ruling party, APC.

Kwankwaso was elected as the Executive Governor of the Northern Nigerian State of Kano between 1999 and 2003, under the flag of the People’s Democratic Party (PDP). He contested the PDP’s primaries in 1999 against Abdullahi Umar Ganduje, Engr.Mukthari Zimit, Alhaji Kabiru Rabiu. The Santsi/P.S.P. were behind the candidature of Abdullahi Umar Ganduje but they lost to Kwankwaso in the primaries.

His tenure as the Governor of Kano State was very eventful because of several other groups who were opposed to his high handed governorship and his attempt at supporting president Obasanjo who hails from a different tribal group.

Kwankwaso was subsequently appointed as the Minister of Defence in President Olusegun Obasanjo’s cabinet in 2003. In 2007, he was appointed as the Presidential Special Envoy to Somalia and Darfur by the Obasanjo administration after losing the bid from his party to contest the 2007 general governorship election.

Kwankwaso was reelected for a second term as Kano State Governor on 26 April 2011 and sworn in on 29 May 2011. He won with a difference of sixty-three thousand plus votes, his party won three-quarters of the house of assembly seats, by winning 30 out of the total 40 seats in the state. On 26 November he was among five PDP governors who defected to the new opposition party APC and formed a PDP splinter group in August known as the G-7.

In 2015, Kwankwaso contested the APC Presidential primaries but lost to Muhammadu Buhari. He was elected to the Senator for Kano State Central Senatorial District Seat on 2 March 2015.

In 2015, Kwankwaso contested the presidential primaries nomination under the opposition All Progressive Congress but lost to Muhammad Buhari. He then swaps to contest the senatorial seat for Kano Central Senatorial District; a political capacity he’s currently occupying.

It will be noted that within his 25 active years in political office in various capacity, Kwankwaso has proven beyond doubt that he’s a naturally gifted leader.

Speaking at the event, Kwankwaso stated that he was reluctant to accept the invitation from Lagos to be celebrated due to some issues that he felt responsible to address back in Kano, but after a few consultations, he finally granted the wish of his friends to take a day off and celebrate his birthday outside his constituency.

While appreciating the organizers of the event for their ceaseless effort to bring him down to Lagos, he reiterated his dedication to one Nigeria and believes anywhere he finds himself within the border of Nigeria is his home.
In his own words;

“I have always believed that anywhere you find yourself in this country; you should see the place as your home. Other tribes in Nigeria that are established in Kano are having the best of times in the state.

“Even some Igbos prefers the Enugu in Kano than the Enugu in the east. I want to urge us as compatriots to embrace unity and peace regardless our tribe ethnic or history. We are one.” He added.

Speaking on the other side of Kwankwaso, the proprietor of Grace School, Mrs. Tokunbo Edun, who is also one of the chief organizers of the event, stated that Kwankwaso is a leader per excellent, one that has contributed immensely to Nigerian democracy, youth development, and unity, adding that Nigerians should appreciate the sacrificial leader.

She added, “His contribution to education and youth empowerment is commendable.
“Words cannot sufficiently describe what amount of blessing Senator Kwankwaso is to this generation, at this time and period.

Mrs. Agboola Fisher Thomas a member of Kwankwaso’s team of friends, also stated that Kwankwaso is a man with an ideal worthy of emulation.

“Of a truth, Nigeria needs more leaders like him who can dedicate their everything to national good rather than for selfish interests.

“It is sad how some supposed leaders pile up billions of citizens hard earned currency only for themselves and family, while others wallow in abject poverty.

“Not many people know that United Nations once recognised RMK’s effort for introducing Free Feeding for Primary School Students in his first tenure. He also achieved a lot in the areas of Education, Rural Electrification and Health, established a State University of Technology at Wudil.

“His electrification programme in the rural areas recorded a great success and was able to give the Federal Government a property that was converted to the Nigerian Law School at Bagauda. He built a number of bridges in the rural areas and introduce a free natal programme for pregnant mothers.

Let me just conclude that he lives his life for others. He’s a leader”, she said.
The South West coordinator of RMK friends, Ladipo Johnson stated that the achievements of Kwankwaso could not be exhausted if one have to start mentioning them.
‘Kwankwaso is a model for leaders to emulate. His youth-oriented projects and achievements are as much as the rain in the sky. I don’t even know where to start from...
Civic Centre Avenue, Governor’s University, First Lady College, Jambaki College, Sports Activities institution at Karfi, Informatic Institution at Kura, S.I.S schools, Midwife School at Madobi,

Sponsoring more than 3500 undergraduates and postgraduates students in different discipline to overseas as a way to enhance the state of education, provisions of free primary, secondary, tertiary and college training to all bonafide indigenes in Kano State, building of over one thousand classrooms called Kwankwasiyya Block, recruitment of over 8000 indigenes in Kano State and a whole lots more.. a 5 of Kwankwasos in Nigeria will rebrand the country; no doubt”, he said.