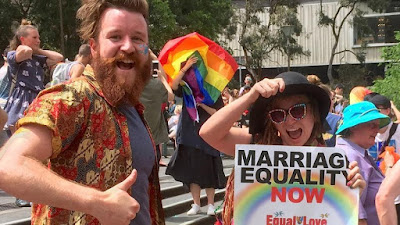 It was a scene of jubilation on the floor of the Australian Senate chamber Wednesday as lawmakers embraced and cheered following the historic passage of a bill to legalize same-sex marriage.

Forty-three senators voted in support of the legislation while 12 voted against. Passed without any amendments, the marriage equality bill now heads to the House of Representatives, also known as the lower house, where it’ll be voted on Monday.

With the majority of lawmakers in the lower house in favor of the bill, it’s expected to pass with ease. Prime Minister Malcolm Turnbull had promised to legalize gay marriage by Christmas ― a vow he’ll now likely be able to fulfill.

Earlier this month, Australians overwhelmingly voted yes on marriage equality in a national postal survey. More than 61 percent of the 12.7 million people who voted in the nonbinding poll expressed their support of gay marriage