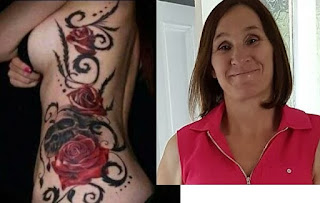 A heartbroken British husband from East Boldon in South Tyneside has narrated how his wife of 23 years left him and their nine children to be with her Gambian lover she met on Facebook.Andy Hepworth, 44, says his wife Heidi Hepworth, 44, ditched him for 30-year-old Mamadou Jallow from Gambia after she started chatting with strangers online.

According to the heartbroken man, who feels his wife has been brainwashed, says she’s now asking for a divorce, saying her future is with Mamadou.
He said she gave herself new treats, including getting new tattoos, giving herself a makeover, then flew to Gambia last month, her first ever trip out of the UK – abandoning her nine children and starting a new life with Mamadou.
Speaking to the Sun UK, the devasted husband said:
“It’s a midlife crisis. She started going to the gym, booking sunbeds, getting tattoos and wearing dresses. The person she has become is horrible. She was a loving, caring mum. Now it’s like an alien has possessed her body.
“He has brainwashed her. It’s one big fantasy for her and she is following it through step by step.”
Andy and Heidi met in the 1990s and were together 23 years. The couple has six children together and Andy has raised three children Heidi had from a previous marriage as his own.
He said:“She had three children from a previous relationship but I brought them up as mine. We then had six kids of our own. Five years ago I moved out but I realised I wanted to go home and she took me straight back. We decided to take the next step and got married.”
Andy, an ex-delivery driver, who served in the Navy for four years, first noticed a change in Heidi in March.
He said: “She was wearing more makeup and dresses which she’d never done before. It just wasn’t her. She was going out all the time with friends and was always on her phone.
“She has strange friends on Facebook, men from Africa and Asia,” Andy says she blocked him being a Facebook friend.
But when he asked if there was another man he was told “no”.He added: “I didn’t think she was messing around with a bloke here, but I did wonder what she was up to. Heidi moved out twice in a fortnight after rows. When she was home inbetween Andy claims he found messages from Mamadou on the family computer.
He added: “It felt like my heart had been ripped out. I loved her. We were always a rock solid. But I think it’s over. She’s said and done too much. A caring mum wouldn’t go off gallivanting around Africa with her new boyfriend.”