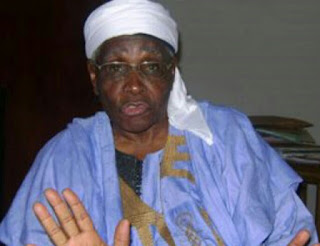 The National Chairman of Northern Nigeria Union, Professor Ango Abdulahi has explained why President Muhammadu Buhari might not get automatic ticket for second term.
According to him, Buhari’s endorsement and adoption for a second term in office by some Northern elements was not automatic ticket.
Abdulahi spoke Wednesday at a news conference in Abuja on the Union’s readiness to host the 5th Commemorative lecture in honour of late Dr. Olusola Saraki holding November 27 at International Conference Centre, ICC.
He said Buhari must earn the endorsement of the North, stressing, “Well, do not expect that the fact that Buhari is of the northern extraction will automatic translate to satisfying every aspiration, yearning of the nooks and crannies of northern Nigeria.
“In any case, he was not elected exclusively by northerners. He was elected by all Nigerians irrespective of the number of votes he got in different parts of the country.
“The election was one to elect the President of Nigeria and this is what has happened regards of how we feel in other parts of the country. Like I told, a few days ago, I was arguing about the issue of marginalization in my interview with Biafra Radio, Germany. People should expect rewards from vote they have cast. Of course, 81 percent of the Buhari’s votes came from the north.
“So, we should expect 81 percent of all shares of government to come to us but that’s not being realistic.
“That’s not what our constitution also says. So, the president I think has done extremely well in terms of his outreach to all parts of Nigeria irrespective of the votes he got in the last election.
“We may complain a little bit, some of us in the north. That’s legitimate politics. He himself admitted, I think, today that some party supporters that were expecting rewards for their support have not realized their aspirations.
“He was aware of this but I think that he has kept to the promise of he is the president of Nigeria. He belongs to all Nigerians. So, we take it that he doesn’t belong to the north or any particular person.
“He belongs to no one. I think that we should take it that he is the president of the federal republic of Nigeria and he will serve in the best interest of Nigeria. Well, there are shortcomings and we hope that someday, it will be made up”.