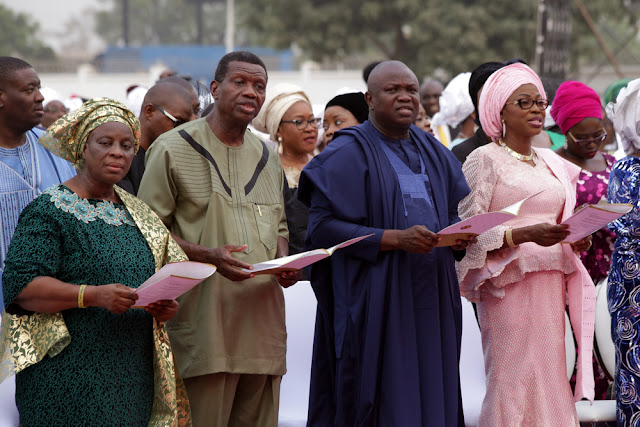 Governor Ambode, who spoke at the State’s 2018 Annual Thanksgiving Service held at the Lagos House in Ikeja with the theme, ‘Ceaseless Praise‘, said that despite the several economic and security challenges that enveloped some parts of the country, Lagos has continued to experience peace and prosperity over the years.

“Since the inception of this administration, we have called on God at the beginning of the year and our prayers have been prophetic as He always granted our desires beyond our expectations. At a time when the nation was in recession, our State was experiencing economic growth and while there was insecurity in other places, Lagos remains calm and peaceful.

“This is not as a result of what the Government has done but by the special grace of God. And all we need to do is continue to give Him praise and thanksgiving and He will continue to bless and provide for us as Lagosians and a State.

Pix 0732/0861: Governor of Lagos State, Mr. Akinwunmi Ambode (m), his wife, Bolanle (2nd right); Chief Judge of Lagos State, Hon. Justice Opeyemi Oke (r); General Overseer, Redemeed Christian Church of God worldwide, Pst. Enoch Adejare Adeboye (2nd left) and his wife, Pst. Folu (L), during the 2018 annual Thanksgiving Service, with the theme; “Ceaseless Praise”, at the Lagos House, Ikeja, on Sunday, 7th January, 2018.
“In this New Year, we submit to Him again and I am confident that irrespective of whatever is happening elsewhere, our State and all our people will continue to excel in peace, good health, prosperity, love and joy. God will continue to shower His blessings on us as a State and our families and homes will experience new and wonderful milestones by His grace,” Governor Ambode said.

He said the Annual Thanksgiving Service presents an opportunity to commit the affairs of the State to God, in acknowledgement of His supreme power in the development of the State.

“It is my prayer that as we come to His Gates and Courts with thanksgiving and with praises today, He will release His blessings upon us, guide and direct our path and lead us through the year successfully,” Governor Ambode said.

The Governor also used the occasion to appreciate the General Overseer of the Redeemed Christian Church of God (RCCG) Pastor Enoch Adeboye and his wife, Pastor Mrs Folu Adeboye and other religious leaders for their prayers and support for the State since the inception of his administration.

Pix 0732/0861: Governor of Lagos State, Mr. Akinwunmi Ambode (m), his wife, Bolanle (2nd right); Chief Judge of Lagos State, Hon. Justice Opeyemi Oke (r); General Overseer, Redemeed Christian Church of God worldwide, Pst. Enoch Adejare Adeboye (2nd left) and his wife, Pst. Folu (L), during the 2018 annual Thanksgiving Service, with the theme; “Ceaseless Praise”, at the Lagos House, Ikeja, on Sunday, 7th January, 2018.
“I offer my sincere gratitude to all our religious leaders for your presence today and continued support for the peace and progress of Nigeria and Lagos in particular. God bless you all,” he said.

In his sermon, General Overseer of the RCCG, Pastor Enoch Adeboye urged  Nigerians to draw closer to God, assuring that when they do so, they will continue to enjoy special favour and blessings from God.