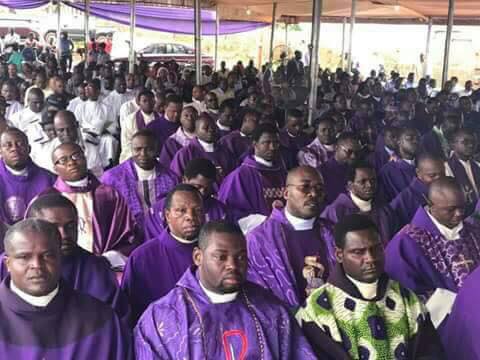 A swirling allegation of corruption is now  rocking the Church of Nigeria (Anglican Communion) over the recent election which threw up The Rt.  Rev.  Humphrey Olumakaiye as the new Bishop of Lagos.  At the Episcopal Synod in Ilorin,  Kwara State, the leadership of the church announced through a statement by its General Secretary, The Rt. Rev. (Dr.)  Ayodeji Fagbemi, that a number of new bishops and archbishops were said to have been elected.

The Rt Rev.  Olumakaiye, according to the statement,  would be transiting from the Diocese of Osun North East to Lagos. However,  the mood among members of the congregation in Lagos is suggesting a strong disaffection and clear opposition to the election of Olumakaiye, seen to have been imposed by the outgoing Diocesan Bishop of Lagos,  The Most Rev.  (Dr.) Adebola Ademowo.

In a statement in Lagos at the weekend  signed by one Mr. Ade Doherty on behalf of members of the church in Lagos and who claimed to be aggrieved over the said election of Olumakaiye,  they stated that his election was stage managed, not influenced by the Holy Spirit and as such unacceptable. They stated:

"The so-called election of Olumakaiye at the recent Synod in Ilorin
was a clear manipulation of the House of Bishops who were "tele guided" by both Ademowo and The Primate,  the Most Revd.  (Dr.) Nicholas Okoh. Of course,  we have it on good authority that huge sums of money exchanged hands to facilitate the so-called election of Olumakaiye and majority of our members in Lagos stand united in opposition to this mischief! It  is a charade and can never stand".

They further claimed that such action by the House of Bishops was a way of trying to elongate the tenure of Ademowo  while they also alleged that he (Ademowo), in order to perfect the election manipulation, facilitated a Multi-million Naira house for Primate Okoh in the Lekki area of Lagos. They made references to Ademowo's earlier statements and actions they claimed paved the way to  Olumakaiye's emergence.

They further stated that their solicitors had prepared a petition to the EFCC to probe the alleged acquisition of the Lekki property, the financial inducements in the House of Bishops, and the alleged porous accounts of the Lagos Diocese and women organisations in the Lagos Diocese, which they allege is the reason for the succession at all costs