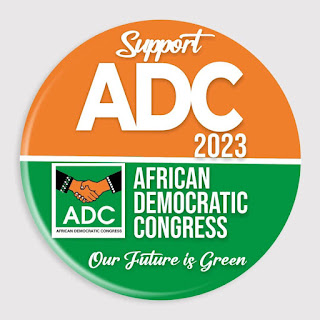 Ahead of the 2023 general elections, the National Executive Committee (NEC) of the opposition African Democratic Congress (ADC) has granted its National Working Committee (NWC) under the leadership of Chief Raph Nwosu, one year tenure extension.

The move, according to the NEC is to ensure the national leadership of ADC is focused on campaign activities across the country to deliver all ADC candidates at all levels.

Briefing the members of the NEC at the meeting which held at the national secretariat of ADC, Thursday in Abuja, the party’s National Legal Adviser Peter Iyiola Oyewole Esq, drew attention of the NEC “to the fact that the tenure of all the National Working Committee of ADC had ended on 21st of August 2022.”

Responding to the development, a member of the NEC and the party’s Deputy National chairman (Politics), Dr Bamidele Ajadi, however, moved a motion that the tenure of the said national officers be extended for one year “for the party to concentrate on the activities ahead, especially the campaign activities across the country which is slated to kick start in two September.”

Ajadi added that “Our party deserves to focus on ensuring victory at all levels for our candidates, not only the presidential candidate but our governorship, Senatorial, House of Representatives, State Houses of Assembly candidates across the nation.”

The motion moved by Hon. Ajadi was, thereafter seconded by another member of NEC Ibrahim Suleiman seconded.

After the motion, the NEC members in attendance unanimously voted for a year extension for the NWC of ADC.

While thanking the NEC meeting for the confidence reposed on his leadership, the party’s National Chairman, Chief Nwosu, promised to work harder to ensure the party delivers on its mandate in 2023.

He announced to the meeting that his leadership will convene a meeting of all the governorship candidates next week as part of efforts to unite the party and work towards victory in 2023.

The NEC meeting was attended by some officials of the Independent National Electoral Commission (INEC).