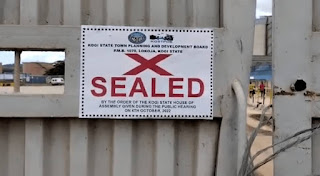 A staff confirmed the development to POLITICS NIGERIA on Wednesday afternoon, adding that, “in fact, I’m on my way home as we speak”.

This newspaper learnt that the KGIRS sealed the company over tax evasion and acquisition controversy.

The action was reportedly backed by the Kogi State House of Assembly.

Kingsley Fanwo, the Kogi State Commissioner for Information, was quoted as saying: “Pursuant to the Constitutional authorities of the Kogi State House of Assembly, and upon petition by the people of Kogi State, an investigation was carried out on the acquisition of Obajana Cement Company by Dangote Company.

“It was found that no valid acquisition took place, as Dangote could not show evidence of what was paid as consideration for the acquisition.

“The legislators invited the Chairman of the Company, Aliko Dangote, before the house for explanations but he failed to appear before the state assembly, giving excuses.

“The House of Assembly therefore ordered the closure of the company pending when they are able to present it with credible evidence of a valid acquisition.”

At 16.25Mta capacity across five lines, Dangote’s cement factor at Obajana is the largest of its three factories in Nigeria.

The company is owned by Dangote Group, which is founded by Nigerian business magnate, Aliko Dangote.