Mr. Fred N Inem .... your days of deceiving the public about who you really are over. 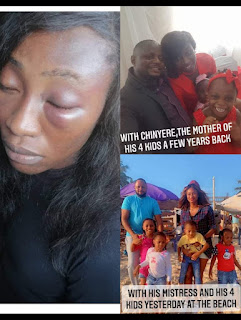 The pain of a mother losing all her 4 children to an audacious psychopath and physically abusive bully masquerading as a 'responsible husband' for the public is a pain that I can relate to, and hence will never stay silent over.

On the 26th of September, 2022 by exactly 11:15 AM, I was scrolling through my Facebook news feed on my previously disabled Facebook account when I saw the video of the woman you married in 2015.

Chinyere Christine , the lady whose family handed to you 7 years ago in perfect condition and sound mind.

The lady you married was crying plaintively for her children to be returned to her.

All under the age of 6 years.

Kids she had been denied access to by you  whom she has made several reports on how you spend more time punching her face, flogging her and dousing her in hot water in your nightmarish marriage; than you do being affectionate or protecting her.

I was distraught and had to send her a DM asking for more details.

My message wasn't seen by her until 3 days later.

She responded weakly-- with the characteristic indifference and resignation that comes from crying for help for so long and not being helped.

I dropped my phone number and she called me minutes later and narrated her story.

A truly sordid and heartbreaking tragedy of how a beautiful, promising 23 year old girl accepted the hand of an abusive, narcissistic 33 year old man in marriage in 2015, willingly took in for him even while in University, and eventually had to drop out of school to commit herself to her husband and birth him 4 healthy children.

And what does she get in return?

A manipulative, philandering woman beater who not only beats and dehumanizes her at the slightest provocation, but has committed her to a hospital bed one time too many.

Mr Fred.... you are aware that presently this woman you married suffers occasional seizures and numbness to a side of her face as a result of repeated blows from you and blunt force trauma against her skull.

To add pepper to injury, after the poor woman ran for dear life, you have restricted her access to her 4 children and have brought in another mistress whom you are conditioning your young, innocent children to believe is their mother.

You were shamelessly spamming my WhatsApp with images of your new mistress playing 'mother' over kids whose biological mother is very much alive, right?

Calling my bluff that we should take the pictures to court, yeah?

The woman that risked her life 4 good times to make you a father has now become all those unprintable names you tagged her in my inbox, yeah?

On your Facebook you are a God fearing and responsible father whose principal achievement in life is taking Polaris bank to court.

But at home, you are a satanic, soulless bloodhound that crawls through the ceiling into his wife's room when she is pregnant to beat her because he feels he has all the police connections and leverage of superior male power to subdue her from seeking justice.

Are you aware that there have been reports from the mother of those kids that yourself or your mistress have already begun bleaching their skins?

You eliminate a mother from the life of her kids and don't even allow her wish them a happy birthday when they clock an extra year, and then turn around to begin bleaching their skins as you visibly have been bleaching yours?

Your last child is 2 years and his young fragile skin is already absorbing skin lightening products.

I told you already, this will not be business as usual.

You aren't just fighting that timid, naive Abia state lady you have been slapping around as you please all these years.

In Africa, Nigeria and Lagos state, it is an abomination to replace a mother in the lives of her children while this mother is still alive.

The forces that will be working against you are far more than anything your mind will ever conceive.

I am a person that believes in justice and the supremacy of the law.

Physical assault and denying a mother her rightful place in the life of her children is a grave and punishable offence because you are jeopardizing the fundamental human rights of another human.

Chinyere's survival story will be published on all major blogs in this country and I will be posting them in series because the abuse she has survived spans years!

You said you sue blogs for a living.

And keep laughing and spamming me on WhatsApp.

I love being underestimated.

I need you to underestimate me!

Special thanks for your contributions: