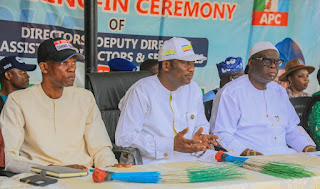 The campaign office of Tinubu/Shetima and Sanwo-Olu/Hamzat 2023 elections received a boost with the visit of the Deputy Governor of Lagos State, Kadri Obafemi Hamzat recently.

He said, his boss the Governor and himself are part of ICC and are in full support of the good job being done in the campaign office.

He told well wishers and listeners to encourage their people to get their PVC's, he stressed that's the only way APC can guarantee victory at the polls.

He noted that the election is a 2 in 1, since Asiwaju is from Lagos State, and he's contesting for the Presidency at the polls, so also the re-election of Sanwo-Olu and himself at the forthcoming elections.

He went further to state that, Lagos is still the bench mark of development and an envy of other states in terms of infrastructural developments, the Security network in Lagos is second to non, and the educational sector is not left out.

The market women who came in numbers to the DG and his team said they are prepared to support the course of the Independent Campaign Council.

They assured the DG of the Independent Campaign Council that all market women in Lagos State will vote APC at the polls.

They also used the medium to thank the Lagos State Governor, Babajide Sanwo-Olu and his entire cabinet for continuing the legacy of Asiwaju Bola Ahmed Tinubu.

They sung Asiwaju and Sanwo-Olu 's praises and wished them well.

Tayo Ayinde, thanked them on behalf the Independent Campaign Council and also encouraged them to turn out en mass to vote for APC at the polls.