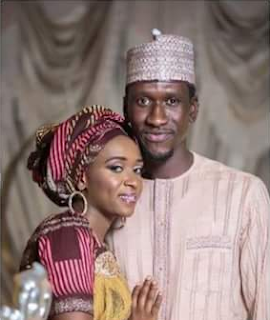 Bilyamin Muhammed Bello, son of a former PDP chairman, Haliru Bello, has been murdered.
The deceased was allegedly murdered by his wife last night. His wife, Maryam Sanda, daughter of embattled former Aso Savings boss, Hajia Maimuna Aliyu, is said to have stabbed him to death.

Maryam, allegedly stabbed her husband following claims of him cheating on her. She reprotedly stabbed him thrice in the back; and several times on his private parts, at their home in Maitama, Abuja.

Part of his ear, was also bitten off before the knife attack and Bilyaminu was said to have been treated at a hospital before returning home.

People advised that he should leave the house but he refused. Maryam allegedly drove him to the hospital after stabbing him but he later gave up the ghost.
The couple had a child together. Bilyaminu’s remains were interred today.