Kalu Distance Self From Campaign Posters, Says No Presidential Ambition For Me In 2019 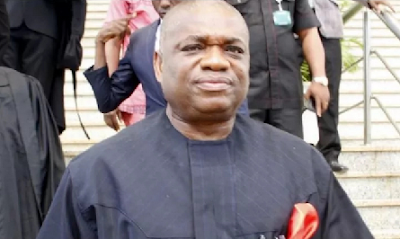 Former Abia  governor and a chieftain of the All Progressives Congress (APC), Dr Orji Kalu has distanced himself from campaign posters pasted along Airport Road, Abuja, with the inscription: “Vote Orji Kalu for President on the platform of the APC.’’

According to Kalu, who is also a staunch supporter of President Muhammadu Buhari, the posters are the handiwork of political jobbers and speculators, who are afraid of his unstoppable political feat.‎

In a statement issued in Abuja on Wednesday and signed by his Special Adviser, Kunle Oyewumi, Kalu insists that he is solidly behind the candidature of President Muhammadu Buhari, if he so desires to run in 2019, adding that the North should be allowed to complete their eight years tenure.