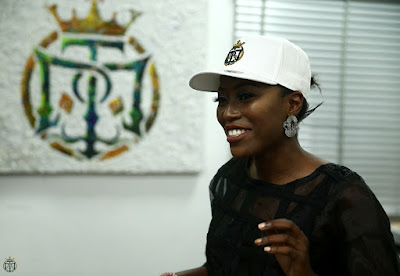 Lagos-based Zimbabwean TV personality, Vimbai Mutinhiri is breaking new career boundaries by teaming up with pan-African talent agency based out of Nigeria, Temple Management Company (TMC).
The beautiful former co-host of the Africa Magic Viewers Award (AMVCA) sealed the new move when she recently signed a management agreement at the corporate headquarters of the company in Victoria Island, Lagos.

Having established herself on the continent as one of the most sought-after TV and show hosts, Vimbai now forges a new alliance with the fast-growing African creative powerhouse to help take her brand to a whole new level of success and accomplishment on the continent and globally.
Speaking after signing the dotted lines, Vimbai said, “I am excited, it is a new journey for me. It is a new season of my career that I am looking forward to. You get to a stage in your career when you had to partner with like-minded people who have the experience and network to take you to where you want to go.
Founded in March 2016, TMC has become a top-of-mind creative and management livewire incorporated in Nigeria and expanding with strong international affiliations across Africa, North America, and Europe.
Focusing primarily in key areas such as entertainment, sports, media and art sectors, TMC represents some of Africa’s top talents in West and East Africa including Iyanya, 9ice, Mavin Records Group, Seye Ogunlewe, Marylove Edwards, Shaffie Weru, Blinky Bill among others.
Welcoming Vimbai to its fold, Mark Redguard, Head Of Entertainment at Temple Management reiterated the vision of the organization to maximize African talents to become global brands.
“Vimbai’s aspiration is in view of what we set out to achieve at Temple Management Company (TMC) and we look forward to a very successful journey,” he added.

ABOUT VIMBAI MUTINHIRI
Vimbai Mutinhiri who was born on February 18, 1987 is a Zimbabwean actress, model and television personality. She was born in Harare, Zimbabwe but raised in Belgrade, Serbia and in Johannesburg, South Africa. Prior to participating in Big Brother Africa Amplified in 2011, she studied in South Africa graduating from the University of Cape Town with an honours degree in politics, philosophy and economics.
She attended at St Edward's School, Oxford and Arundel School in Harare, graduating in 2000 and 2002 respectively. She then studied Social Sciences at the University of Cape Town, graduating in 2008 with a bachelor's degree.
Vimbai started her career at the age of 15 years as an actress in Zimbabwe, in a short film titled “Who’s In Charge”, with the movie featuring at the Zimbabwe International Film Festival. She went on to play a lead role in Zimbabwe’s first soap opera titled “Studio 263”. While studying at the University of Cape Town, she continued modelling.
In 2011, Vimbai took part in Big Brother Africa season 6 (Amplified). She has gone on to host major African events, notably the first ever Africa Magic Viewer’s Choice Awards (AMVCA) broadcast live to 54 countries from Lagos, Nigeria.
Currently the Face of Castle Milk Stout (Cameroon), she has also been on the runway at the SA Fashion Week and the Zimbabwe Fashion Week.


About Temple Management Company
The Temple Management Company Limited (“TMC”) is a full-service creative talent and event management company incorporated in Nigeria and operating in the Entertainment, Sports, Media and Art sectors.
Using a 360 approach to management, the company oversees the day to day business/affairs of creative talents and ensures that they maintain sustainable competitive advantage over the rest. TMC prides itself in its ability to operate on a global scale.
The company’s mission is to continually improve on African content, bridge the gulf between talents and their foreign counterparts, and guarantee that processes are in line with international best practices.