Adeyanju, His 2017 Resolutions & Our Other Brother 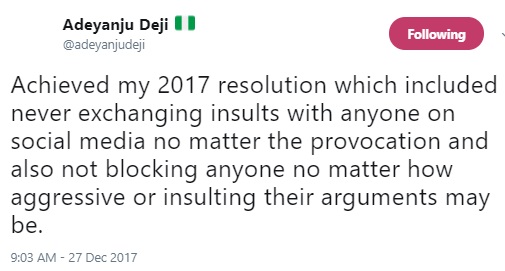 Lol, former Head of New Media for the Peoples Democratic Party, PDP, and Convener of pro-democracy and good governance group, Concerned Nigerians, Deji Adeyanju has just swept us off our feets with his 2017 resolutions that he fulfilled. Apparently, Deji at the beginning of the year had said, no matter who insults him (opposition of course), no matter the bomb they throw, no matter what at all, he won’t insult or block anyone on twitter and he just announced he kept to his words, lol.

If you know the way these guys operate on social media especially on twitter you will be laughing so hard right now, lol. You know at the moment, Deji is one of the few Nigerians tackling this government hard, asking them for a better Nigeria.

He started the Resume or Resign protest with Charlyboy, which eventually 'brought back' the President to the country after spending months in UK. They also had another were they asked the President to prosecute corrupt officials and the most recent one, were they stormed Libyan Embassy in handcuffs demanding slave trade of Nigerians in Libya must end.