Another 257 Nigerians Arrive From Libya 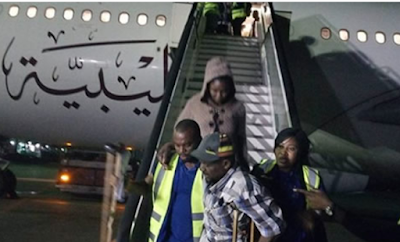 A few hours after 144 Nigerians voluntarily returned from Libya, another aircraft carrying 257 of their compatriots landed at the Murtala Muhammed International Airport, Lagos on Wednesday.

The spokesperson for the Lagos Airport Police Command, Mr Joseph Alabi, said the returnees arrived aboard a Libyan Airlines aircraft at the Cargo Wing of the airport at about 1.30 a.m.

He said they were assisted back to Nigeria by the International Organisation for Migration and the European Union after being stranded in the volatile North African country en route Europe.

Alabi said, “We received another batch of Nigerians early this morning from Libya. “They comprised of 65 adult females, 179 adult males, seven children and six infants.”