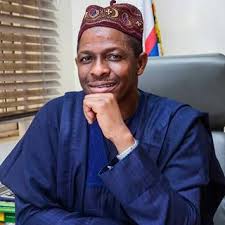 The lawmaker representing Eti-Osa at the Lagos State House of Assembly, Engineer Gbolahan Yishawu has been described as a disciplined and humane leader, whose leadership qualities would propel remarkable successes in governance at the Legislature level.

These were the various submissions of his colleagues, and members of staff of the Assembly, as well as various groups, who have extolled the virtues of the resolute lawmaker

Adesope Edun, a media practitioner and Alumni convener of Grace Schools expressed optimism and confidence in his leadership to deliver more democratic dividends to the teeming populace of Eti Osa, in partnership with the executive arm, noting that the legislature was already making positive impact within a short time.

The lawmaker who is addicted to embarking on projects commissioning every 3 months, despite his jurisdictional role as a mediator, he has commissioned no fewer than 6 projects within the last 6 months on this administration and he’s not backing down anytime soon.
Adesope described Yishawu as a man of singular vision, integrity and unwavering duty and a dedicated soldier and public servant. He has a strong administrative structure for his constituency, beyond representing his people, Yishawu was an administrative trailblazer.
He is always ready with counsel and advice. If there was any public event or occasion regarding the welfare of his people, his towering figure is certain to be found present.
Yishawu is always passionate about his work. He always exhibits a distinct dedication and an ability to work with everyone”,

“He was a leader in every right, a formidable colleague, patriotic statesman, and complete gentleman.”

has carved a niche for himself in the over 30 years history of the legislative history of the Gateway State in Nigeria. His personality excites as much awe as fear from the people, especially the political class.

Yishawu means different things to different people, to some, he is a patriotic politician, while others see his as a "troublesome lawmaker" who loves challenging the powers that be as a result of his passion and desire to see that his people are not deprived of their right at any time. He has proven over the years that he cannot be intimidated nor coaxed while his hallmark remains his ability to stand by the truth at all-times despite all odds.

Meanwhile, his courage, resilience and tenacity of purpose in the pursuit of his political goals have, no doubt, stood his out as one of the highly respected leaders. Little wonder, keen observers of his membership in the State Legislature and politics generally can attest to his contributions to unity and development of the State which has assisted him to place his footprints in the sands of time everywhere across the State.

Hon. Yishawu proved to be a good legislator by the value and quality representation he gave the good people of Eti Osa State Constituency for years.