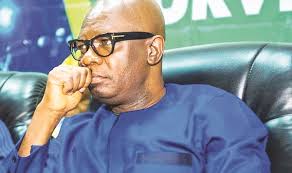 Away from the popular allegation of a forged certificate and blanket betrayal, more condescending attributes of Agboola Ajayi, the gubernatorial candidate of the Zenith Party, has been revealed to the media and the good people of Ondo State, after his desperation chased him from the All Progressive Congress, APC, and after the People’s Democratic Party, PDP camp used, and dumped him.

The popular progressive movement in the State, Ondo Forward Movement, OFM has reiterated that Agboola will loose on the first ballot come Saturday, October 10, 2020, when the people of Ondo will decide who will sail the ship for the next four years.

Speaking to newsmen on Wednesday, October 7, 2020, the group convener, Olumide Joseph maintained that Agboola will dance naked after he’s be stripped of what is left of his dignity by the opposition party, before finding temporary refuge in the party of insignificant value in the State.

"The desperate hunger for power-at-all-cost has exposed the true nature and colour of Agboola, who has at every historical junction bitten all the fingers that have fed him and burnt all the bridges built to get him aligned with the party, which has built his political career and made him all that he thinks he is today.

"Agboola had carried the badge of failure for as long as history can record before he was pulled out of his dying political career by his benefactor, Rotimi Akeredolu.", he stated

Agboola Ajayi was formerly a member of the PDP before he defected to APC in 2016, he contested in 2016 election against the same Akeredolu, but he was humiliated at the poll. He was however chosen as Akeredolu running mate

“Mr. Ajayi formally joined the ZLP in August 2020 after he was rejected by the PDP, which lured him to snitch on his political benefactor, Rotimi Akeredolu, in the false promise of clinching a guber ticket with the party. Unfortunately, his sleazy conspiracy against the governor, came as a shock, even to the PDP. If Ajayi can betray his own boss, he can betray anyone, thus, PDP dumped him.” He told newsmen

"The party would go ahead to state categorically that Agboola’s exit from the PDP will not affect its vote.

“In the spirit of loyalty, Governor Oluwarotimi Akeredolu ignored all warnings about his deputy, Agboola Ajayi, and ensured he was well paid to make him comfortable. Ajayi is the only deputy governor in Nigeria, who receives as high as 13 million naira as his basic salary. He also had “free hands to decide on what project to embark upon and which contractor to award projects to. Yet, his desperation to have it all pushed him to consider the pot of porridge that eventually bury his political career.

“With no sense of remorse or dignity, Agbool Ajayi flunks his shamelessness around to reiterate that he would emerge victorious against Governor Akeredolu of the APC and Eyitayo Jegede of the People’s Democratic Party (PDP).

“Agboola is an ill-cultured pseudo-progressive irritant, who climbed through the APC political ladder and pushed it aside. He is now stuck in the mud and he’s dead-desperate to drag anyone on sight with him.

“We are also aware of his plot to fabricate lies and propaganda to demean the hard-earned integrity of the governor as a mechanism to distract his excellency, Rotimi Akeredolu so as to pave way for the PDP. While we also know that the governor will not dignify him with any response, but the people of Ondo knows Agboola so well, and nothing that comes from his camp will be taken seriously. They may gather together, but not by God: whosoever shall gather together against Aketi shall fall for his sake

“The people of Ondo knows better. The good people of the state will file out on October 10 to speak in one voice, a voice that may sound strange to a bastard of strange parentage, who puts power before value.

"October 10 will be the day when his masquerade will dance naked in the market.”, he added.