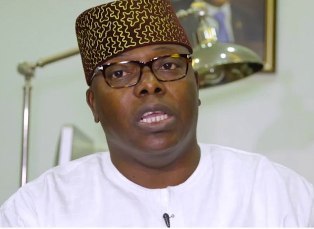 Distasteful reports coming from our once cherished Iruland hold that the defacto-king by circumstance, Gbolahan Lawal has turned into a pseudo-monarch monster and he’s hell-bent on destroying all the value that is left of Iru’s heritage and historical pastime.

Reports reveal that the Oniru, ordered his thugs to take to the streets to intimidate and suppress anyone who challenge his excesses and recklessness in Iruland.

Video shows how some men were attacked by Gbolahan’s thug on Saturday, December 5, 2020, at a family shrine, where many people were severely injured and the 200 years old shrine was reduced to nothing.

An eyewitness who is currently undergoing traditional treatment after suffering convulsion due to the fetish charms used against him recounted that the thugs declared that anyone who is not in support of Oba Oniru (Gbolahan) will die untimely.

“Unfortunately, the new Oniru's reign within a year is already replete with examples of less than stellar leadership.

“Gbolahan's penchant for violence, murder, genocidal tendencies, and/or other deviancies is unquantifiable.

“Even when you know that the plot and conspiracy that brought you to royalty was riddled with lies, you don’t have to see others as enemies of the community.

“The deafening silence of Lagos State governor, Babajide Sanwo-Olu, the Lagos Commissioner of Police, Hakeem Odumosu, and other stakeholders on this matter is also worrisome.

“Recall there was also a report of Prince Tijani Oniru, one of the sons of Oba Abiodun Idowu Oniru, the late Oniru of Iruland who died in 2019, attacked by Oba Gbolahan’s thug in July 2020, and up till date, nothing was done to address the situation.

“This is what conspiracy and imposed leadership have brought upon us in Iruland. We hope that the government will treat our situation as a matter of urgency, as his paranoia destroy us as a community,” he said.