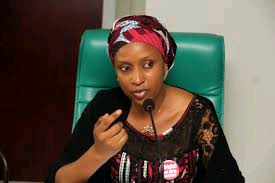 Hadiza Bala, sacked managing director of Nigerian Ports Authority (NPA) has continued to come under intense criticism for her statement lamenting the ongoing insecurity crises in Nigeria, THE WITNESS reports.

Hadiza spoke in the context of the commemoration of eight years after the Chibok girls were abducted in Borno State by Boko Haram terrorists.

The former NPA chief was suspended in May 2021 over the allegation of failure to remit the N165 billion operating surplus to the coffers of the federal government. Though she was later cleared of the allegations, President Buhari, however, did not reinstate her to office.

In recent times, several states in the country, including Kaduna, Plateau, Zamfara, Benue and others, have witnessed large number of terrorist attacks.

Hadiza, who reacted through her verified Twitter handle, condemned the situation and demanded swift actions from the government to secure the release of victims.

According to her: “It is eight years today since 276 girls were abducted in Chibok Secondary School, 109 still remain in captivity. Many more girls, boys and indeed citizens of all ages have been abducted from schools, communities and while enroute journeys,” she wrote.

Usman, a co-coordinator of the #BringBackOurGirls movement, which came to life on the heels of the Chibok abductions had been very active in the movement’s activities until she was appointed the managing director of the NPA.

She had thereafter gone silent on issues around activism, or matters critical of the government.

She was, however, recently shown the way out of the appointment after a fallout with the minister of Transportation, Rotimi Amaechi.

*Her comments have however sparked criticisms, with some Nigerians labeling her as a ‘shameless hypocrite’ and fresh attention seeker for not speaking out while she was in office as NPA*