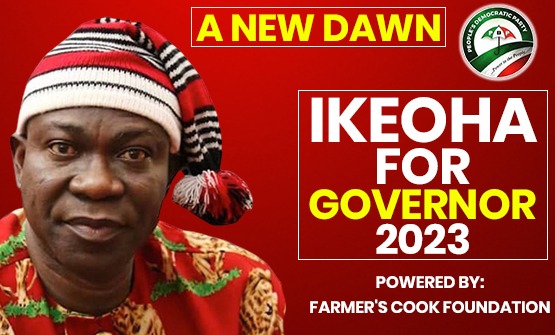 We members of the above body with visible formidable politically conscious followership and membership are pleased to officially inform our dear good people of Enugu State that we're embarking on operation joint cooperation with Market women in Enugu State to ensure victory for Ikeoha for Governor 2023 Project.

There is nothing like zoning in Enugu State. Few friends with their allies sat down and endosred zoning and now want to impose their zoning arrangement on the entire People of Enugu State. That's absolutely unacceptable. You will recall that Senator Ike Ekweremadu said "On the claim by some Enugu leaders of an existing zoning agreement.

I don’t like talking down on my leaders, friends and colleagues. You know, if you are talking about zoning, you are talking about the interest of the entire People of Enugu State, men, women, traditional rulers, town union Presidents, representatives, the ordinary people. Then someone is telling you that he, and a few people sat down in one place and discussed zoning. Which party were they representing? That is the thing. I heard that narrative; someone said it was in the Banquet Hall in the Government House during Sullivan’s (Chime) regime. If you and few people decided to visit the Governor and had some food and drinks and then had a conversation, does that mean you should wake up and say you discussed or agreed? What kind of rubbish is that? So, there is no such thing like zoning." Senator Ike Ekweremadu stated.

"if you are zoning the governorship, what criteria are you going to use?  Is it senatorial zone or the cultural zones? We have four cultural zones in Enugu. We have Awgu, Agbaja, Nkanu and Nsukka. So, you believe that someone from Awgu will never be Governor of Enugu State? So, when are you going to zone to them? The issue of Governorship of Enugu State is a serious matter; let’s drop all these mundane discussions because everyone has his own arguments or candidates." We wholeheartedly agree with Senator Ike Ekweremadu.