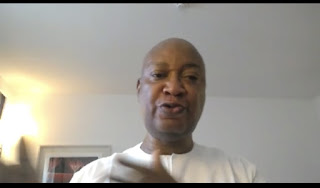 Former Anambra State Governor and presidential aspirant Peter Obi, on Wednesday, May 25, 2022 tendered his resignation from the Party and stepped down from the race. This was coming after internal politicking within the PDP divided the party along ethnic and religious interest.

Peter Obi has garnered support from outside and within the country but his fate would first be determined by the party delegates before the teeming supporters could back him with votes at the poll.

However, the Group Managing Director of Suru Group, Edward Akinlade has described Peter Obis resignation as a huge loss to the party and Nigeria as a nation.

He disclosed this on Wednesday, May 25, 2022, during a virtual press conference from the United Kingdom noting that Peter Obi has what it takes to get Nigeria back on the path of progress and that his campaign would require little funding.

Mr Edward  Akinlade warned that Nigeria would remain in perpetual depression for another eight years and go into extinction if it failed to produce a formidable president in 2023.

“At this time, equity, fairness and justice demand that the office of the president of the Federal Republic of Nigeria be zoned to the South East. But more importantly, even if Peter Obi was from Borneo, I would vote for him at this time, beyond ethnic and political affiliations

Peter Obi stands head and shoulder over all other candidates from the South East, whether of the PDP or of the APC. He is a consummate businessman and a trusted political administrator”

The real estate guru said Obi’s candidacy would require little or no campaign, as Nigerians across board are already agitating for him to become the president. It is, therefore, politically wise to support his aspiration.

“A Peter Obi presidency will not only heal the nation’s fault lines but will also restore the country’s economic growth.”

Mr Edward Akinlade is an astute real estate Professional and Property Developer with an emphasis on high End Commercial and Residential Real Estate Developments. He is well experienced in the identification of excellent property locations and development internationally and locally.

He is highly competent in Property Finance and Trading, versatile in the origination, conception, structuring and completion of wide range property developments. He has pioneered the development of cooperative upscale development of luxury terraced housing units in the local Nigerian market and abroad. Worthy of note is his contribution and wealth of experience in emerging hospitality industry with a broad focus on the West African sub-region. He pioneered the arrival of the US Best Western Hotels brand into Lagos Ikeja.