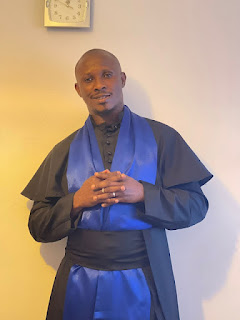 UK-based Nigerian pastor, Prophet David Babatunde Ephrata, the leader and founder of Bible Based Church, United Kingdom, has again issued a strong warning barely ahead of the coming elections in Nigeria. He stated that the candidate who emerged at the end of elections will totally erase any cause involving Yoruba nation or Republic of Biafra.

Recall last Christmas, the fearless man of God, issued stern warning directly to those who are into farming of any form as he alerted them of the many dangerous challenges that lie ahead in 2023.

While farmers are already confirming this in their recent distress call for protection against intruders, the prophet has again revealed another shocking revelation as received during the online service held on Sunday, January 15, 2023.

He stated in during the service:

“I have a serious message for Nigerians about who will win the elections in 2023. Please pray very well in the year 2023 for the election to run free and fair without bloodshed.

“God revealed to me that the candidate that will win the election, will erase anything that has to do with self-determination or true federalism. He will also perish the idea of Yoruba agenda or Igbo agenda.

“This is not the time to fight for Yoruba nation or Biafra, or Arewa nation. “This is the time to pray.

“The image I saw in the revelation was more of a young white man, who took a duster and erase Biafra and Odua nation from a whiteboard.

“That is the clear vision that God showed me. Yoruba, Igbo, and Arewa nation will not be heard anymore. This coming government will no hesitate to eliminate any person or group of persons that advocate for self-determination.”

He implored Nigerians to keep faith and move closer to God to avoid imminent crisis that may cause civil unrest in the country.

Prophet David Babatunde Ephrata’s missionary journey began when he was born many decades ago, he was born in Lagos but was moved to the southwestern part of Nigeria before he clocked one year old. His strong connection to depth scriptural and spiritual knowledge began to grow as he advances into a teenager and as he acquires more academic knowledge.

Since 2006, when the prophetic message becomes clear, he has remained a consistent personality and respectable prophet who delivers divinely inspired prophecies and messages to the people.

His credentials as a prophetic man of God are staggering. His prophecies have been nothing short of sensational and on point. Where other men of God are waiting for a situation to gather momentum and take shape before they permutate and then release prophecies, Prophet Ephrata reveals those things that will happen long before they happen. Sometimes, he will foretell things a year or even more before they occur.

A case in point is the failure of Buhari’s administration. A few months into his first term in office, Prophet Babatunde warned Nigerians not to be over-excited at the emergence of Muhammadu Buhari as president, that he is not the Messiah Nigerians were waiting for. Not only that, he said Nigerians should prepare for extreme hardship because the Buhari administration will bring upon us the worst economy ever witnessed in Nigeria. And that is exactly what is happening right now.