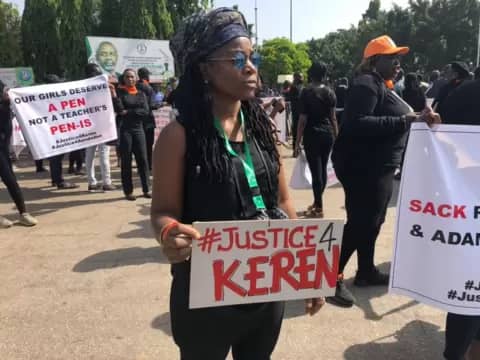 The Federal Republic of Nigeria.

Subject Matter: As a mother, We demand you join the call for Justice for Keren and ensure Keren gets Justice.

Ma, we humbly request for your motherly intervention in the case of Late 14 years old Keren vs Premier Academy, Lugbe-Abuja.

Miss.Keren-Happuch Aondodoo Akpagher, a student of Premiere Academy Lugbe, Abuja died on 22nd of June 2021 after she was raped in Premiere Academy, Lugbe-Abuja. We understand that keren was raped and equally given an overdose of glucocorticoid which led to her death. We members of #Justice for keren movement have clearly stated previously and have constantly maintained that anyone that played any role directly or indirectly in what caused the death of Keren Happuch Aondodoo Akpagher will be brought to justice. We shall bring them all to justice and firmly hold them adequately accountable. Ma, We wish to use this open letter to bring to your notice the story of Keren vs Premier Academy Lugbe Abuja as well as Keren's Mother side of the story.

Keren's mother, Vivien Akphager, stated that “I named my daughter Keren-Happuch, which means God has filled my cup, but Premiere Academy, Lugbe took the cup emptied the water and broke the cup. The cup I gave to Premiere Academy was full, they returned to me empty and broken. This is too much to take. My heart is in turmoil”.

As a mother, she said she did everything within her power to save her daughter but it was too late because those (Premier Academy) she entrusted with the responsibility to look after her daughter did nothing to help her, rather they shielded a suspected pedophile and later embarked on a media stunt to save their face. You would have noticed that since my daughter died, instead of the management of Premiere Academy, Lugbe, to allow my family to grieve and mourn her, Premiere Academy, Lugbe, Abuja has been preoccupied with wanting to look good to the public rather than work to bring out the rapist." She stated with a broken heart. According to her explanation, management of the school had knowledge of her daughter’s condition (that she was raped in the school) and despite effort by Keren who had earlier made a distress call appealing to her to come and take her home, the school authority told her that there was no cause to worry that she was fine. But this was not so as it was an attempt to buy them time to manage the situation and sweep it under the carpet. But a concerned staff from the school had informed her of her daughter’s condition and had insisted that she come to take her home. “On the 18th June 2021, my daughter had informed me that she had an eye infection and asked me to come and pick her by 5 pm the same day. But her teacher, whose phone was used, advised that I come to pick her on Saturday, 18th of June 2021, being a call day to avoid landing her (teacher) in trouble since her phone was used.

“On the 19th day of June, being an official call weekend, Keren-Happuch called me, begging that I come to pick her as she was ill with an eye infection. I called the school matron to secure an exeat on the 19th day of June for Keren, but was told Keren would be placed in isolation for seven days on her return from home. The matron suggested an alternative of the school driving her to the clinic and taking her back to avoid isolation.

“After her treatment, Keren was distraught when she learnt that she was going back to school and begged to go home with me. I promised her I will secure an exeat from the school and pick her. I called the principal, who agreed to give her one. “Following that assurance from the principal, I got to Premiere Academy, Lugbe on the same day at about 1pm to pick my daughter, but wasn’t granted permission to pick her. The matron assured me that they were taking good care of her and that she was fine.

“Following assurances by the matron, I left without my daughter. However, while heading back home on the said 19th day of June, I received a call from a concerned staff of the school, telling me that my daughter was badly sick and seriously distressed in school on Wednesday, the 16th day of June 2021 with the inability to walk without the assistance of some of her friends, who helped her to class to write a continuous assessment test in tears.

“The caller told me to disregard claims made by the matron that my daughter was not sick, insisting that she was in dire straits and needed to be taken away from school immediately.

“The caller advised me to come to the gate and make a lot of noise to constitute a nuisance otherwise I would not be allowed to take my daughter away.

“Alarmed at this information, I returned to school around 2.30pm or thereabout, constituting a nuisance at the gate for the next three hours or thereabout as well as calling the phone numbers of the school’s principal and matron before I was finally allowed to take my daughter away for medicare.

“Three days after I took away my daughter, she died in a hospital in Abuja on the 22nd day of June 2021. But, before Keren’s death, the hospital discovered that she had been raped, condom left in her vagina, which had caused an infection that resulted to sepsis and trauma that led to her demise.” Keren's mother, Viven Akphager, stated

OUR LEGITIMATE QUESTIONS BEGGING FOR ANSWER FROM PREMIER ACADEMY LUGBE-ABUJA:

We demanded for CCTV footage of 15th and 16th of June 2021. The school said their system deletes footage after 30 days. Can you imagine that?

We demand for Justice for Keren. We demand for your motherly concern and intervention in ensuring that Keren gets Justice without further delay. In conclusion, We thank you in anticipation of your favourable response Madam First lady. Be rest assured of our highest esteem.